This story starts out like many of my awkward dating stories, we met at a ______ (party, game, dog park, does it really matter?).  We texted for a week or so before making plans for an official date.  Shortly after we finalized details, I walked away from my phone.  When I returned I had the following messages from him. 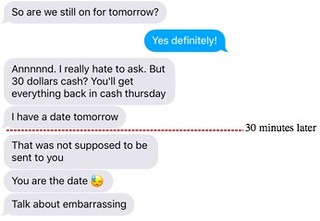 I felt really bad for the guy and I’ve been caught in equally as awkward situations so I tried to smooth things over and drop it.

Fast Forward to the Date:

We’re sitting at the bar watching a football game, well, I’m watching the game.  He apologizes for the awkward text and I told him it’s not a big deal and change the subject to the game.

Amanda:  I love football and the Cowboys are my team.  Do you have favorite sport or team?

Broke Dude: I’m not in to sports and love chilling at home with my dog, watching Netflix.  What are your favorite shows?

Amanda’s Thoughts: Did you just say Netflix and chill?

Amanda: I love the outdoors and stay pretty active, so I don’t have a show I watch on a regular basis but I like the Office when I can catch it. (I just dated this date…get it?)

Broke Dude: Oh I love sports and I’ve been watching this hockey game on TV.

Amanda: (points to the only TV in the bar) Do you mean this TV?

Broke Dude:  Oh yeah that TV.  Sorry, I meant football.  I also play on a kickball team, I’m the pitcher.

Amanda’s Thoughts:  Not at all the same, but at least it’s something I can work with.

Amanda: Oh awesome!  What league?  Kickball is so fun whenever you don’t have the overly competitive jerks trying to murder the other team with the ball.

Broke Dude: Yeah it’s been a while since I’ve played but we always won.  Anyway, I wanted to let you know how sorry I was about the awkward text earlier.

Luckily the bartender requests our drink order and I ask for a dirty martini and he says, “What’s that?”.

I break down the contents of a martini and he said, “So it’s like a cosmopolitan? You must like the show Sex in the City!”

I suggest we switch bars to a place with video games, anything to keep me distracted.

On our way to bar 2 he starts apologizing a third time about the awkward text.  At this point I’m annoyed and want to go home, but I already committed to a second location so I’ll wait about 30 minutes then head out.

We walk up to the skeeball machine, and start playing.  Then he brings up his kickball pitching skills and takes 3 steps back with skeeball in hand.  My eyes widen and I tell him “Please don’t do it.  This isn’t kickball.  I am begging you.”  He laughs and says “No I’m really good, just watch.”

So I did.  I watched the ball hit the wall so hard it popped out of the machine, and slammed against the scoreboard with a cringe worth ‘bang’ and cracked it.  The ball fell on top of the net encompassing the machine.  My jaw dropped.  I stared blankly at the machine and said, “Why?…..But Why?”.

He ran up the machine to get the ball and I suggested we leave.

As we’re walking out he mentions having champagne at his house, I said “Ew, why? I’m a whiskey/beer/wine/anything but champagne kind of person”. He said, “Oh, well I have 3 bottles at my place. Want to come over and drink some?”

Amanda’s Thoughts:  I just told you I wasn’t in to champagne and you want me to drink 3 bottles with you at your house so we can ‘Netflix and chill’?  This guy sucks.

I told him I needed to go home but thanked him for hanging out with me, then I swiftly walked towards the parking garage.  He followed.  He tried to kiss me. (I’d like to point out he tried and that I can be pretty agile when I need to be).  Then, as fate would have it, he was almost hit by a car. I shouted I hope you’re ok as I sprinted towards the garage.

what do you think? Cancel reply